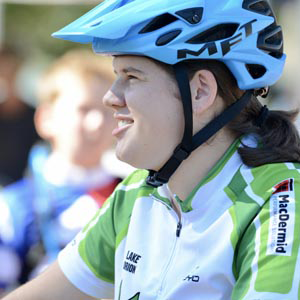 Ready to GoPro? Not so fast!

This video was filmed by the Lake Orion High School Television Production Workshop class. I went to them after some of the mums from my team started asking me about it. I talked to Mr. Smith, our broadcasting teacher, and after some persistence he finally got a couple of girls to come out and film the last race of the season. This video is the outcome of a camera in the hands of two girls who didn’t understand the sport, so imagine what you could do with a camera and your friends! Get filming share your creations with your school and encourage more people to join this amazing sport that we all love. If you’re looking for inspiration check out my YouTube @ Evil Genius Girl. The more the merrier.

You’ll have even more opportunities to film your MiSCA season with the relaxed rules that were announced last month. In case you didn’t hear, we can now have cameras mounted on our bikes or chest during races for 2018! This may be your season to take some incredible footage. I’m sure they’ll make more announcements and update the rules download soon.

Most people will know what a GoPro is, but when it comes to action cameras GoPro isn’t the be all and end all. I got my first GoPro when I was about 10 or 11 and it lasted a good few years but when it started to fail me I looked into other types of cameras because GoPros are expensive. In doing my research I found a lot of other noteworthy brands that had action cameras. Most were actually made by companies that make navigation systems and fitness trackers so the cameras actually include some cool aspects that GoPro doesn’t have. For example, the camera I ended up buying was the TomTom Bandit action camera. This camera has a built-in speedometer so if you use their app or desktop studio you can put an overlay on the video. Some of the other overlays included 2D G-force and even your 3D G-force, it can show your altitude, and when connected to a fitness tracker you can overlay your heart rate. Another bonus I found with the Bandit is that it does need any cords to connect to a computer. All you have to do is pull the battery, TomTom likes to call it a bat-stick, out and it’s got a built-in USB so you can plug it straight into your computer.

If you’re looking at getting an action camera definitely do your research. Some action cameras are better than others and they have different uses. Not all expensive cameras are good and not all cheap ones are bad. My Bandit ended up costing me about $150 and that included the spare bat-stick I bought with it. Have a great mountain bike season!